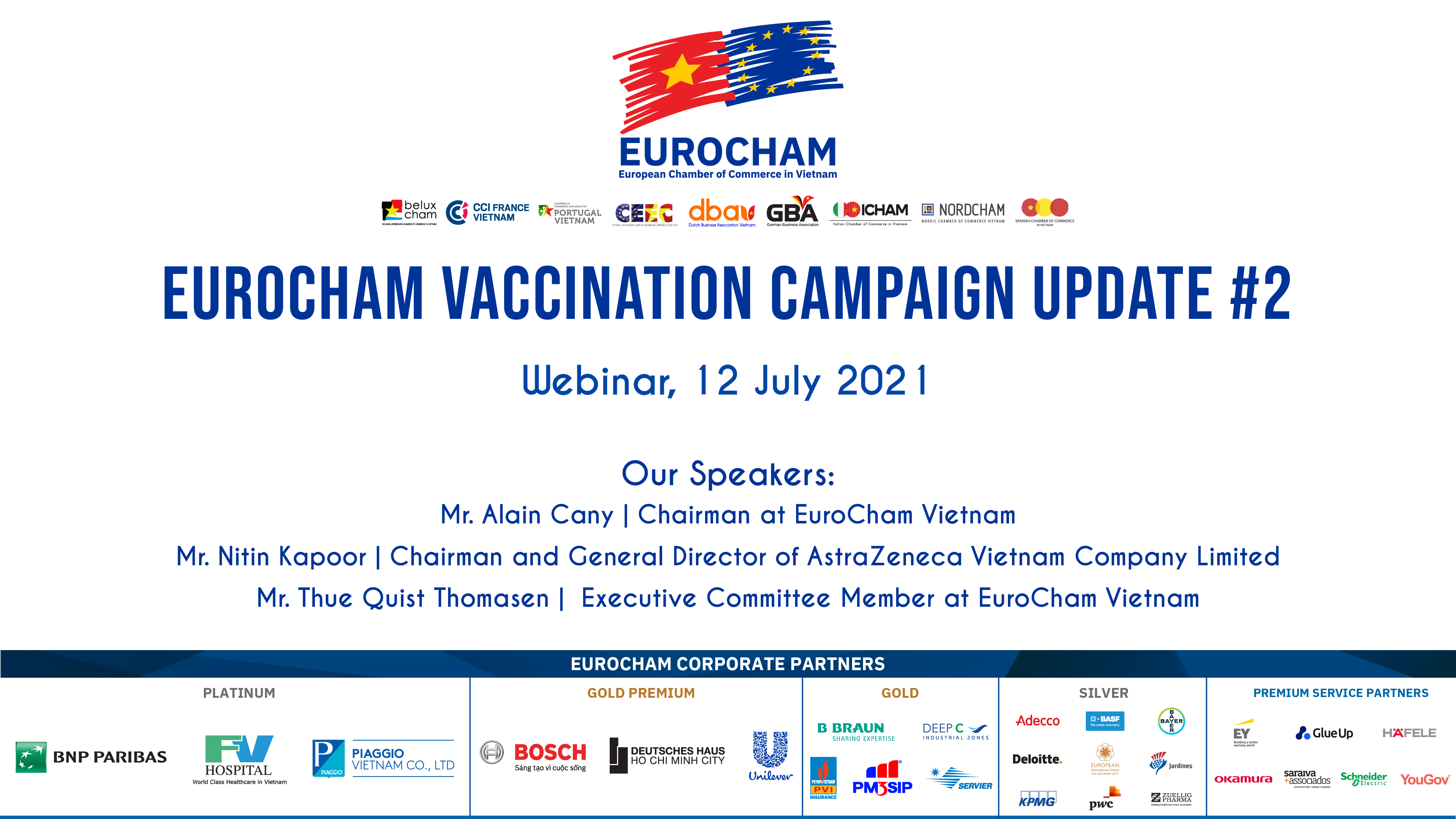 EuroCham Chairman Alain Cany opened the event. He summarized the chamber’s recent activities since the last webinar, which include meetings with the Ministry of Health and other high-level engagements with the Party’s Central Committee and the Minister for Foreign Investment. EuroCham has also written to the Prime Minister and Deputy Prime Minister of Vietnam on a range of subjects related to COVID-19. In short, our five priorities in all this engagement have been:

Mr Cany updated attendees that EuroCham has tried to secure additional vaccines. But it has become clear that procurement is a government-to-government affair. The private sector can support, however, and this is something EuroCham has worked hard to do in recent weeks. For instance, we have helped to connect Vietnam’s ambassadors in EU Member States with potential suppliers, and emphasized that our companies are willing to pay if these vaccines can be used for their staff. We also sent a joint letter, co-signed by all our nine affiliated business associations, to urge EU Member State ambassadors to push for more vaccine donations to Vietnam – following the example of Japan and the United States – and to consider vaccinating their own citizens here.

On prioritization: EuroCham and our Sector Committees have been successful in persuading the government to include medical device, pharmaceutical, seaport and related shipping staff in the list of people prioritized for vaccination. Meanwhile, regarding funding, we have requested that Vietnam’s vaccination fund be transparent and that it differentiate between companies making charitable donations and purchasing vaccinations for their staff. On quarantine, we understand that Ho Chi Minh City will be one of the first areas to implement shorter quarantine requirements as soon as these are approved at the central government level.

Mr Cany also provided an update on EuroCham’s recent vaccination questionnaire. Four hundred and thirty companies responded in the last few weeks – representing almost 100,000 workers – and 399 indicated their willingness to cover the cost of vaccinating their own staff. Meanwhile, 259 of these companies are willing to pay for the vaccinations of their workers’ families. There was also a strong preference for European- or US-manufactured vaccines, with just 15 per cent of members being prepared to take a Chinese- or Russian-made vaccination. 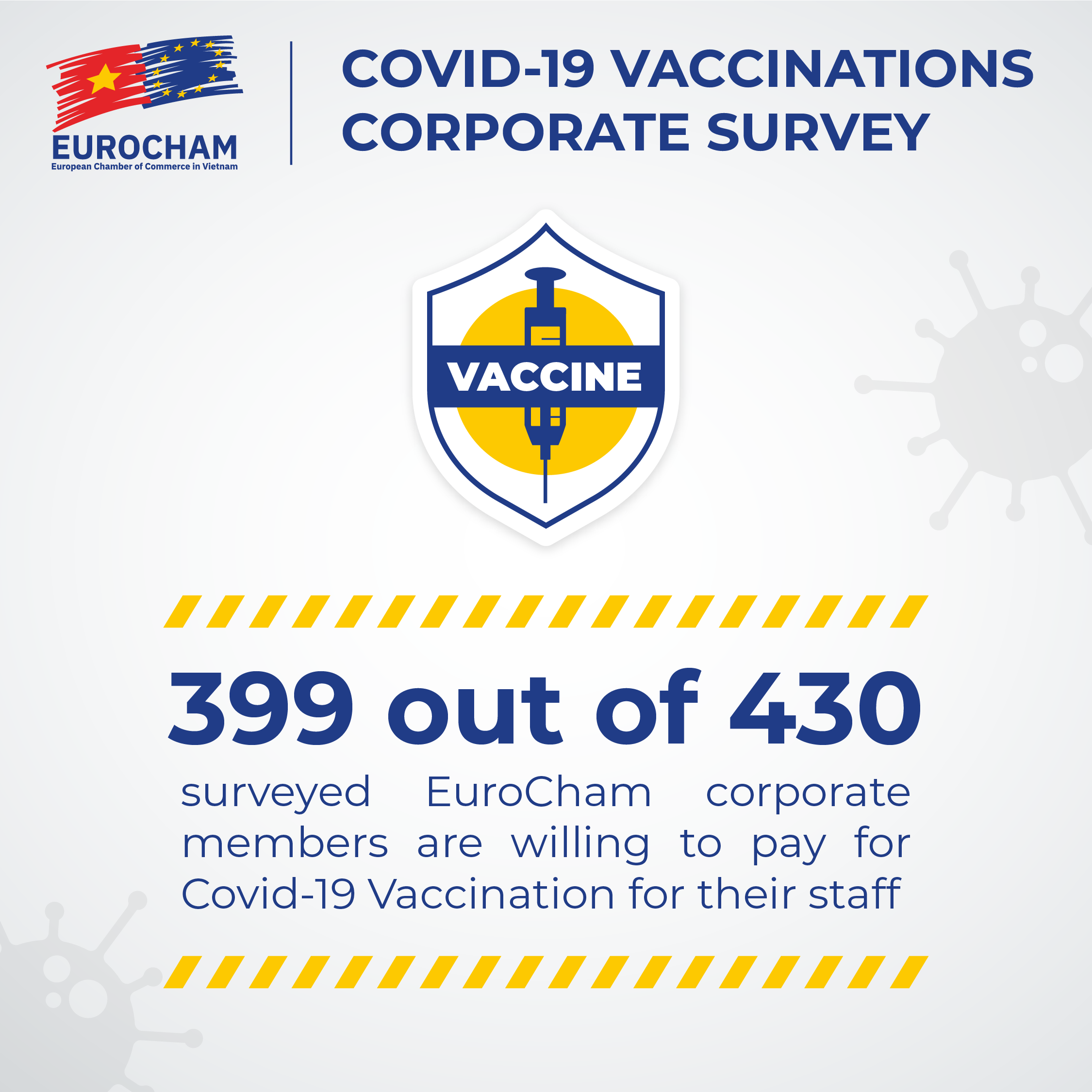 Later, General Director of AstraZeneca Vietnam, Nitin Kapoor, described the current situation on Vietnam’s vaccine procurement. He shared that the government has been working with suppliers to source vaccines as quickly as possible, working around the clock like other governments around the world. Vietnam received about 1 million AstraZeneca doses last week alone, with Pfizer and Moderna vaccinations also beginning to arrive. Around four million people have been inoculated so far. This will pick up pace soon and companies need to be prepared at short notice. For instance, Mr Kapoor recommended that companies should run pre-screening to understand if any of their staff have underlying health conditions which would require them to be vaccinated at hospital rather than at a vaccination center. He also added that a new government database has gone live this weekend where people can register for vaccination.

EuroCham Board Member Thue Quist Thomasen then provided a first-look at the results of EuroCham’s latest Business Climate Index (BCI). The headline BCI figure has fallen during this fourth wave, though not as much as during the first outbreak of the pandemic in 2020. While companies remain confident in the medium-term prospects of their headcount and investment plans, business leaders are worried about the impact of the lack of vaccinations on their commercial operations. Drilling deeper into the data, companies in HCMC are more worried than those based elsewhere in Vietnam, which is not surprising considering that the southern metropolis is one of the areas hardest-hit.

In the Question & Answer section, speakers and participants discussed vaccine passports and which vaccines might be accepted in Europe to avoid quarantine; what proof of vaccination status might look like; the length of time between first and second vaccinations; quarantine requirements; the registration process for experts and their families coming to Vietnam; and how companies can support Vietnam with its vaccination drive, over and above cash donations.