Supporting Our Members in the ‘New Normal’

However, while this is of course welcome, it is not the end of the road. Our members continue to face significant challenges in resuming their commercial operations and helping their staff return to work, with inconsistent regulations and red tape hampering efforts to get back to business as usual.

Therefore, the EuroCham team remains active. In particular, we have been continuing our high-level engagement with the authorities to raise these issues and propose solutions which will support our members, their companies, and staff. You can find a snapshot of our work below, but please don’t hesitate to contact our team for more details.

EuroCham continues to advocate for the swift and safe re-opening of companies to support our members as Vietnam learns to live with the COVID-19 pandemic. In that spirit, on 1 October, Chairman Alain Cany wrote to Dong Nai People’s Committee requesting a clear roadmap for re-opening on behalf of European companies in the province.

While welcoming the steps being taken towards re-opening in recent weeks, the letter emphasized that the burdens on our members have not eased and their re-opening is being tied up in red tape. This is a particular concern when rotating staff under the ‘three-on-site’ model and when workers attempt to enter from other provinces.

The letter emphasized the serious and significant impact that these current measures are having on companies in the province, and the risks to foreign direct investment (FDI) should the situation continue. The latest EuroCham Business Climate Index (BCI) shows that 40 per cent of members have shifted some production overseas, and a further 20 per cent are considering doing so. Once gone, there is no guarantee that these jobs and investment will return.

To ensure that Vietnam retains this FDI and continues to attract new European enterprises in the future, EuroCham requested the immediate implementation of consistent guidelines. In particular, we recommended that a national vaccination pass be implemented to ensure the free movement of people who have received two vaccinations; streamlined health requirements for the rotation of staff; no more restrictions on inter-province travel; and centralized regulations to reduce confusion for companies and to ensure the smooth circulation of goods and people.

On 1 October, EuroCham met with the Binh Duong People’s Committee to discuss the current challenges facing businesses as the province re-emerges from lockdown and re-starts normal commercial operations. 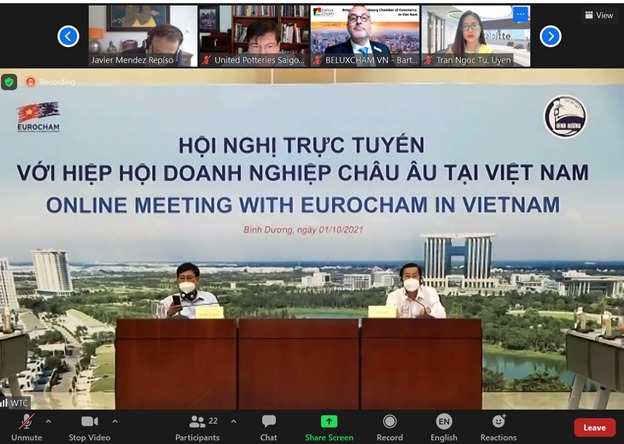 Speaking on behalf of Binh Duong, Vice-Chairman Mr Mai Hung Dung provided an update on the COVID-19 situation in the province. He shared that there has been a significant fall in both deaths and cases, with new infections now averaging 1,500 a day compared to 5,000 at the peak of the pandemic. He also highlighted that 95 per cent of the population has now received their first vaccine, with over 10 per cent receiving two doses. Mr Dung reiterated that both national and local authorities would like to re-open as soon as possible. However, cautious steps need to be taken in order to protect public health. In that spirit, Mr Dung welcomed EuroCham’s contributions - such as the Breathe Again Vietnam campaign - as well as the insights of its members.

EuroCham ExCo Member Erwin Debaere shared the results of the latest Business Climate Index (BCI) which found that 90 per cent of European companies suffered during the recent fourth wave outbreak. He thanked the authorities for their actions to date in easing commercial operations. However, some challenges remain - such as a slow vaccine roll out, travel restrictions, and the financial and administrative burdens of the ‘three-on-site’ model. He urged the authorities to take a more flexible approach which balances the need to protect health with the urgent need to resume normal life. Mr Debaere pinpointed EuroCham’s five requests: accelerated vaccination, reform of the ‘three-on-site’ model in light of its impact on workers’ mental health, create and regulate a travel bubble, introduce a ‘vaccine pass’ to allow frictionless travel, and seamless circulation of goods.

The event also featured contributions from major European investors in Binh Duong. Mr Bruno Wache spoke first, representing the Planchon Club of more than 25 French enterprises in the province. He highlighted how turnover has fallen over 40 per cent in 2021, with 60 per cent of jobs being lost due to the suspension of normal business. Mr Wache pinpointed two specific issues which were inhibiting companies: road blockages between provinces and the ‘three-on-site’ model. He urged an easing of the restrictions on transport between provinces; the abolition of ‘three-on site’; a fast-track procedure to allow vaccinated foreign experts to re-enter Vietnam; and simplified administrative processes for integrating workers with financial support for hospital services, test kits, and serious F0 cases.

Meanwhile, Alexander Bishoff from United Potteries shared how social distancing measures have interrupted production and led to spiralling costs for businesses. He stressed the need for a tangible roadmap for reopening with a clear timeline of implementation; online, up-to-date lists of red, orange, and green zones; clear instructions on how workers can return to the workplace; and prompt vaccination. Later, Mr Olivier Do Ngoc from EZ Land emphasized that greater use of e-government procedures could support both companies and authorities to continue functioning during restrictions; while a seamless ‘travel bubble’ between Binh Duong and HCMC would help to ensure that both provinces can rebound and recover from the pandemic.

Concluding the meeting, Vice Chairman Dung confirmed Binh Duong’s full support for business communities. He reassured attendees that the ‘three-on-site’ model is a short-term solution and should be modified soon, and outlined the province’s five tasks in the ‘new normal’: isolation to be at the smallest scale possible; mobile health care centers will be established in industrial zones; vaccinations will be prioritized; the free flow of goods and people will be facilitated; and the People’s Committee will continue to meet and talk with private enterprise.

Following this meeting, on 1 October, Binh Duong issued Directive No. 4988/UBND-VX ENG | VIE which outlines the province’s roadmap to the ‘new normal’. It stipulates that production, business, trade, and service activities can operate so long as certain preventative measures are in place.

Then, on 2 October, Binh Duong People’s Committee issued a second Directive 2455 ENG | VIE on conditions for production and circulation in the province. Highlights of Directive No. 2455/SYT-NVY include that people who have received two doses of vaccine, or one dose at least two weeks ago, or who have recovered from COVID-19 for more than a fortnight, will be allowed to participate in intra-regional travel. Those wanting to travel between regions will also need a negative test result taken within the last 72 hours. Meanwhile, businesses who want to re-open will need to have an approved COVID-19 prevention plan, undertake regular testing and screening of their workers, and ensure strict adherence to the ‘5k’ public health measures. Companies operating under the ‘three-on-site’ model will need to test workers before allowing them to return home; however, those using the ‘one-road-two-destinations’ and ‘three-green’ models will not be required to do so.

For more information about EuroCham’s work to advocate for our members as we enter a ‘new normal’, don’t forget to follow us on Facebook and LinkedIn, sign-up for our Newsletter, and check our Website.